Today's puzzle theme celebrates National PANDA day (March 16th) with a very nice grid depicting the face of a panda. If I'm honest, however, I'm a little down right now on words that start with 'pand.' Starting Monday ATNINE, my co-workers and I are all required to work from home for indefinite period of time. ACK!

But I digress. We get two nice long theme answers in parallel Downs in the east and west: BLACKANDWHITE and WASHINGTONZOO. I like to think SPIRITANIMAL, another nice long down, is bonus theme material. And no self-respecting panda-themed crossword puzzle would be complete if it didn't also contain the classic black-and-white treat, OREOS. :) 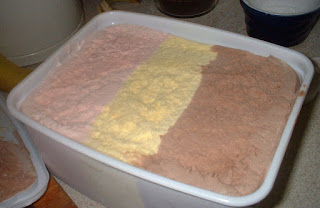 In case you're wondering, I FWOE'd over in the far west. I didn't know "Tony-winning actress for 'Miss Saigon'" (LEASALONGA) and the spelling of her name makes it a little difficult to guess. PLUS, I wanted eeK for "Yikes!" - so much so that I ended with eCK after PESCETARIANS (People who do not eat meat but do eat fish) forced out the middle 'e'. Derp.

Some of the non-theme clues were quite colorful including:
"Something drawn for sport" (BOWANDARROW) - I don't know if I would have come up with this one without the downs!
It has a lot of competition on TV (ESPN) - see what happened there?
Good name for a financial advisor (IRA) - ha.
Put on (GAIN) - very good
Strain to recall? (ECOLI) - groan
Rivers of New York City (JOAN) - nice hidden capital

I also liked VERISMO, which I've never heard of, but was happy to learn, and SOANDSOS, which is funny on at least two levels.

Let's hope things will start to look up for everyone in the not-too-DISTAL future.