Today, in the center of the puzzle, in the center of a week of puzzles by Black constructors, we have a man who made the fight for civil rights the center of his work, JOHNLEWIS. The puzzle highlights his method of NONVIOLENCE as he engaged in GOODTROUBLE, a good example of which is the FREEDOMRIDERS, who demonstrated for integration in the early 60s. It also highlights GEORGIASFIFTH congressional district, for which he served in the U.S. House for more than 30 years. 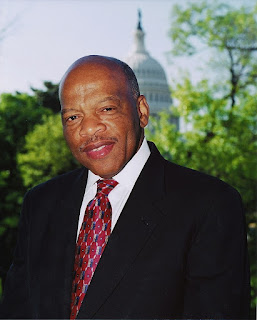 It's a nice tribute, and for all the stacked theme material, I thought the fill was pretty decent, only straining noticeably at OOLA ("Return of the Jedi" dancer) and the Japanese duo, BIWA (Japan's largest lake, located NE of Kyoto) (the directional hint didn't help, but thanks anyway) and NARUTO (Popular Japanese manga series). Those are pretty ATONAL, as it were, but the crosses were fair, and there's a lot of other really good fill that balances it out for me.

I like the conversational entries BANGOUT (Do quickly, as an assignment) (or a puzzle review), WEVEMET ("No need to introduce us"), and SAYSBOO (Utters a sound, informally). And in the "just plain old good words" division we place INERTIA (Slugishness), SIPHONS (Sucks up, in a way), and ANEMONE (Flower that shares its name with a sea creature).

Thumbs up for JOHNLEWIS, for this puzzle, and for racial and sexual equality.

Posted by Horace Fawley at 4:36 PM