After reading yesterday's blog post over, I am struck with a sense of possibly unmerited guilt. After all, who am I to pass judgement on the efforts of the J.A.S.A. Crossword Class? As they say, she who can not do, teaches. Or in this case, critiques.

At the same time, one should be true to one's aesthetics, which is why it's nice to be able to say that today's puzzle hits it out of the park. Just looking at the long answers, you have the excellent juxtaposition of BEERGARDEN (kinda wanted "biergarten," but that's fine) and RAISEAGLASS. Especially with the very nice clue for the latter. And even better, it crosses 22A: Old Forester and Old Overholt offereings (RYES). I myself take a rye as my hard alcohol of choice. But most days will find me relaxing with a beer.

In case you were wondering (as I was) what 35A: Leftovers from a doughnut, say (TIREMARKS) is referring to, feast your eyes on the attached visual example. 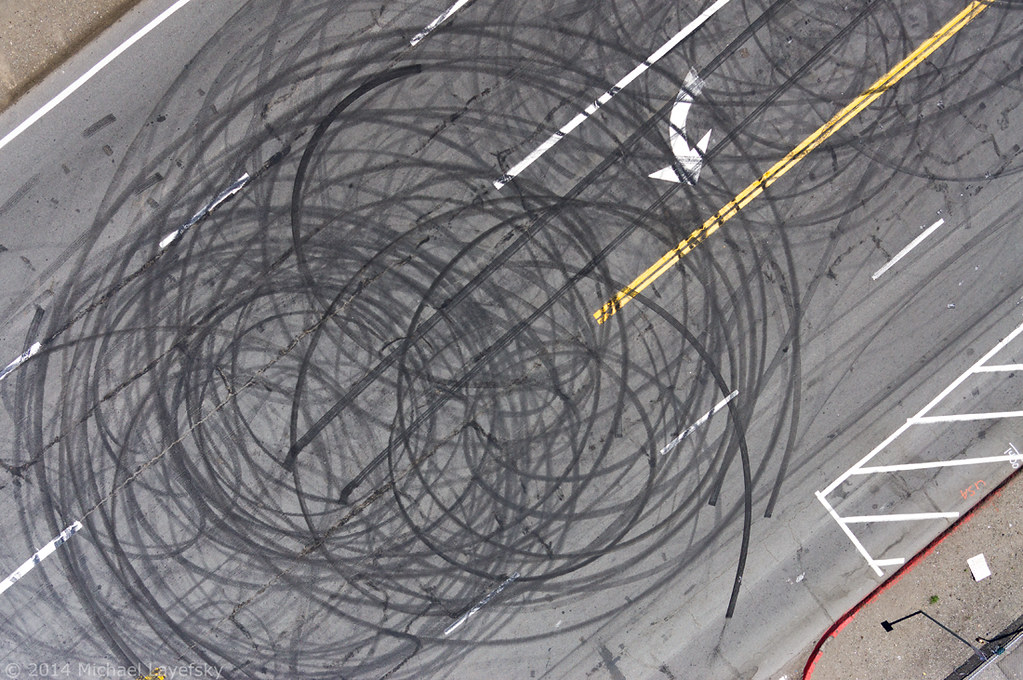 In the NE, 10D: "You thought wrong!" (AUCONTRAIRE) is lovely. I was uncertain when I had ____NTR_IRE just what was going to fit into that middle blank. But I trusted my crosses, and then found the French phrase, which made it all work out.

For another nice side by side pair, look at GROTTO and SEATURTLE. Which reminds me of my honeymoon in Kauai. We went on a catamaran trip out around the Na Pali coast, and got to meet some giant sea turtles. Mind you, the guides told us that if we wanted to get up close to them, we should not swim directly at them. Hope and I followed these instructions, but all the others swam avidly towards them, scaring them away. The stupidity.

NOTUPTOSNUFF is such a great phrase. It's only been used twice in the NYT crossword, and the last was in 2006, so it feels incredibly fresh. It originates from the early 19th century in England, and does indeed refer to the powdered tobacco.

I could do without E- answers, like EMONEY, but otherwise I have little to complain about.