Greetings, Dear Reader! Frannie is taking the day off today, and I'm filling in for her. I'll try to incorporate some of the OLE humor content that Frannie is known for, but I can't promise too much KNEE slapping. 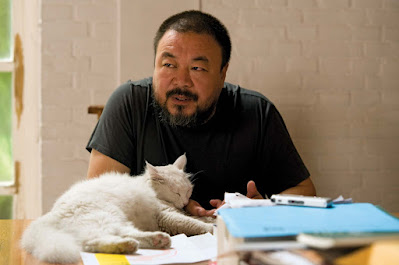 Today's unusually thin grid (14x15) features horizontal symmetry. Also unusual, I think, is that there are only three theme answers and a revealer, and everything is grouped oddly - two together, one far below... It just seems weird to me.

Today I didn't have any idea what was going on until I hit the revealer, and then I worked upwards, "fill"ing in "I[fill], for one" NEWSCASTER (the late, great, Gwen Ifill), "[Fill]more and more" PRESIDENTS (later, but not greater), and finally "Land[fill]" DISPOSALAREA.

I've often thought that all trash bins should be labelled "landfill" instead of "trash." In 1983, the artist Mierle Laderman Ukeles covered a New York City trash truck with mirrors to remind people that the trash being hauled away was their own. "I want people to know they are part of what goes into this truck," she said of her work "The Social Mirror." Anything that can be done to make people think more about what they throw away, and how much they throw away, and what happens to all that they throw away, the better.

Well, that wasn't very "Frannie-like," now was it?

I was utterly fooled by the clue "Some bouncers use them," and even tried to cram in "nightsticks" before I finally saw POGOSTICKS. Hah! And "Red Rose" was a tricky one for PETE. ANTE, on the other hand, I would say is more often heard with the shorter "penult" if it is heard at all.

In all, a decent enough puzzle. A little Thursday trick to get the Turn rolling. Tomorrow, Frannie should be back.

And since I didn't have much humor to offer, I'll leave you with a quick joke - A man tells his doctor, "Help me, I'm addicted to Twitter!" His doctor replies, "Sorry, I don't follow you."

Posted by Horace Fawley at 9:26 AM