A very nice Friday grid from Mr. Steinberg. He's used a Z shape before, and I was a little worried at first that the one-square channels between sections would make for difficult transitions, but it didn't work out that way at all.

Only four three-letter answers today, three of which are quite nice! AVE (40D: Hail and farewell) (everybody loves Latin!), ENG (25A: Bath site: Abbr.) (tricky!), and ADA (6D: Org. concerned with bridges and canals) (great clue for a common entry). The other one, well… let's put it in the same group with ENISLE (9D: Strand, in a way), and ROMNEY (16D: Presidential candidate who wrote "No Apology") (personally, I'd like one). But seriously, "Romney" is perfectly fine. He votes in my precinct, after all! 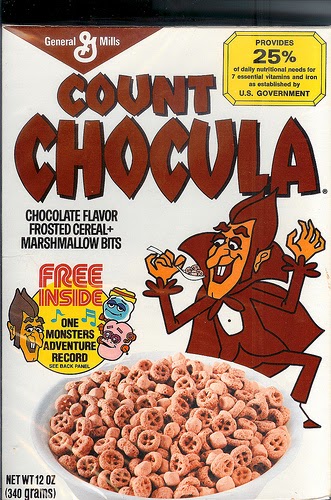 Aside from those few entries, however - ok, and maybe PANTY (13A: Raid target) it's a cute clue, but it just seems wrong - there's not much to complain about. My favorite clue might be 38A: Olympian's first name that sounds like another Olympian's name (APOLO). It's so obvious, but, like CHROME (32D: 2014 Kentucky Derby winner California ____), it took me a couple crosses to get it.

Enjoyed TROUSSEAU (14A: Something a bride brings to a marriage), TROUPE (14D: Play group), CHOCULA (20A: Count at the breakfast table) (I always preferred Boo Berry or Frankenberry myself), CHARTED (32A: Was a hit, say), WARRIOR (36A: Mars, notably), COMET (41A: Cupid's teammate), OVERALLS (42A: Ranch dressing?) (excellent), BARCELONA (39A: Site of the largest sports arena in Europe), and FREEWAY (1A: Major artery) (actually tried "carotid," briefly, which fit!). That's a lot of good material, and really, it's not all of it! There's the lovely "CH" cluster in the middle too. It's a little thing that's obviously just done for the fun of it, because it can be done. Mr. Steinberg is an interesting constructor. He is looking beyond the mere fact of filling the grid. I feel that even in the short time I've been doing his puzzles I've gained a better appreciation for his work, and I look forward to seeing what he does in the future. I feel he is capable of great things.

Frannie liked the grid mostly because she got to work on it, but she also enjoyed MACRO (35D: Certain shortcut) and REINHOLD (27D: Judge of movies), both of which were key to breaking the SE.

It's a solid Friday puzzle, and there's probably more to say, but we've had plenty of CHIANTI already, so we'll cut this off now and see you tomorrow.