We're back to a "time" theme, with the word TIME running twice around four black squares in the grid. Rather nice, really. It's cool, I think, how 56A: Where the ball drops on New Year's Eve ... as depicted literally in four places in this puzzle (hmm... how do I indicate the answer here?) is the only one of the "times" squares that uses it literally. It's a very nice theme/not theme, you know what I mean? 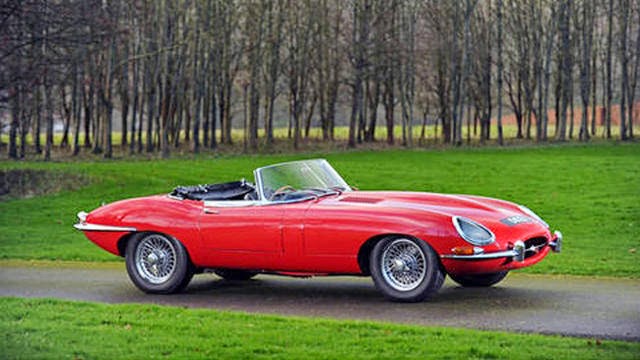 Again today, as always this week, there are some tricky and interesting clues and fill. OVENMITTS (26A: Range wear?) elicited an audible response when it finally came to me, and I thought "50A: Holds" was a great clue for CITADELS. OHPLEASE (29A: "Give me a break already!") seems to go well with "Go Pfft" from yesterday. MOSEYS (21D: Strolls) is a great word, and HATEMAIL (10D: Letters that are hard to read) was another tricky one.

Of course, all those "Time"s make some near-duplication necessary, like TEMPS and ATEMPO, and, for that matter, ATTEMPTED, and MIT, OVENMITTS, and DMITRI, but those last ones aren't really all that similar. I forgive it all! Also, I liked seeing "Clark" in the clue for MIT - it is my Dad's alma mater!

Lastly, for your information and enjoyment, I have included today a photo of a 1965 Jaguar XKE convertible, once owned by Sir Elton John. As the locals might say around the Clark campus, "Nice caaahh!"