Blindauer week rolls on. I think I could get used to this - slightly harder-than-usual puzzles, very well done, with smart clueing and interesting fill. I'm learning a lot of new names, too, like Huarte, Rehm, and now CARLORFF (36D: "Carmina Burana" composer). I wasn't even sure where to parse that one! (It's Orff.)

It's a little strange to have DIOXIDE (6D: Compound containing 10-Down) and OXYGEN (10D: Element #8) in the same puzzle, and I'm guessing it was forced, in a way... but we're not talking about that, are we? 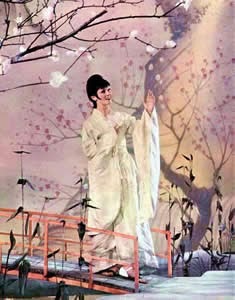 So, let's see, the theme moves from "time" to "vision" today. We have PEEKABOOISEEYOU (17A: Words to a baby) and FORYOUREYESONLY (59A: 007 film of 1981), and a smiley face right in the middle of the grid. Kind of cool. He does what he wants, apparently, Mr. Blindauer.

Speaking of doing what he wants, I wasn't sure how I felt about GOPFFT (1D: Die) when I filled it in, but I have come around on it and now I like it quite a bit. Interesting factoid about Medici in SPINACH (14A: Catherine de'Medici is said to have eaten it at every meal), and, being half Finnish myself, I enjoyed FINNS (23A: Fjord explorers?). I did not particularly enjoy XOO (16A: Losing line in tic-tac-toe), XER (21A: Ballot marker), or that damn AFTA (55D: Aqua Velva alternative), but that's not much, and besides, we've got the excellent KUNGFU (18D: A master of this really knows his chops), the very nice LANCELOT (39D: Model of chivalry), the tricky SANGRIA (42A: Strong punch), and YUMYUM (48D: "The Mikado" maiden). Any reference to the Mikado is ok in my book.