A good ol' Thursday rebus puzzle, just like I like! I was temporarily thrown off by the image in the black squares, which looks more like a Ritz cracker to me than a CHOCOLATE[CHIP]COOKIE, and that [CHIP] all the way at the bottom was the first one to come to me, but it quickly made previous instincts ([CHIP]MUNK & [CHIP]SHOT) make sense. I had thought of Alvin for "26D: Nonhuman singer of a 1958 #1 song," but the length was off. Same thing for "44D: They may be made with pitching wedges" - obviously chip shots in golf, but again… too short. Of course, having such occurrences on a Thursday makes you suspicious, and eventually it was the cookie that made it all crumble. (Do they award Pulitzers for blogs yet? Asking for a friend.) 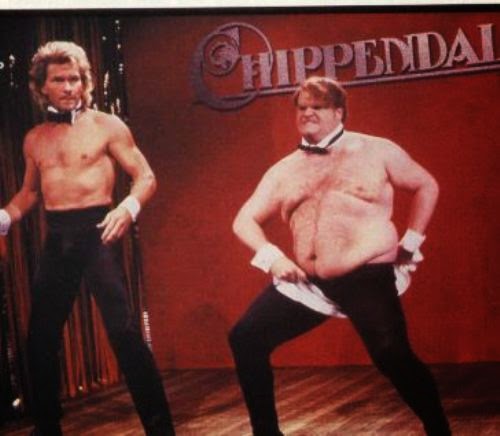 I like how the [CHIP]s are randomized around the grid, and I like all the words made with them. [CHIP]OTLE (29D: Fast-food chain named after a spice) was interesting, especially because I first thought of Chili's. Heh. Who doesn't love any mention of the [CHIP]PEWA (16D: Tribe of the Upper Midwest)? And [CHIP]ENDALESDANCERS (16 Entertainers with something to get off their chests?) was a surprising and hilarious answer, once I finally worked it out.

Now, as I said yesterday, I am not a puzzle constructor, but as you already know, that will not stop me from making pronouncements on the relative difficulty or ease of constructing. Today's, it seems to me, with it's "picture" of a cookie (Ritz… button… whatever), it's five rebus squares, its good mix of high-point letters without tipping over into pangramville, and it's overall interestingness and cleanness, seems like it would be a pretty hard thing to do. Sooo… well done, Mr. Woolf!

A few more things: ELOCUTE (49A: Engage in oratory) is a good word with a slightly odd clue. SINUSES (13 They may be blocked in the winter), ditto. Wouldn't spring or fall work just as well? VERONIQUE (37A: French woman's name meaning "bringer of victory") is interesting, as is AR[CHIP]ELAGO (42A: The Bahamas, e.g.). Who knew?

Lastly, I have to give a shout out to Frannie, who helped bring this one home. I spent several minutes staring at the NW, where my brain was not FLUID (1A: Moving) enough to get 1A, and PEARCE (10A: Actor Guy of "Memento") (and "Priscilla, Queen of the Desert!) would not come to me. Nor would LAUDS (2D: Hails) nor ICEL (4D: NATO member with the smallest population: Abbr.) (odd abbrev.). But PEARCE did come to her, and then the rest was made easy.

It's not a perfect grid - the NE is sketchy - but it was certainly good enough to be entertaining.