It's fall in New England, and we're all missin' the warmth of summer, but at least we don't have to be carryin' on without a good Monday puzzle!

This was a fun one. It started out a little blah up in the NW with BSA (1A: Org. with merit badges) and OAS (13A: Western Hemisphere treaty grp.), and maybe you could throw OBOE, OTERI, and ESSEN into the "been there, done that" pile, but it opens up well with SINGININTHERAIN (24A: Title hit of a 1952 Gene Kelly musical). Coincidentally, I just watched "An American in Paris" for the first time this past weekend. (Frannie has, who watched old movies a lot with her dad when she was younger, has seen it many times.) I don't want to give anythin' away, but that lead character was pretty light on his feet. Seriously. He just floats around, doin' whatever he wants! 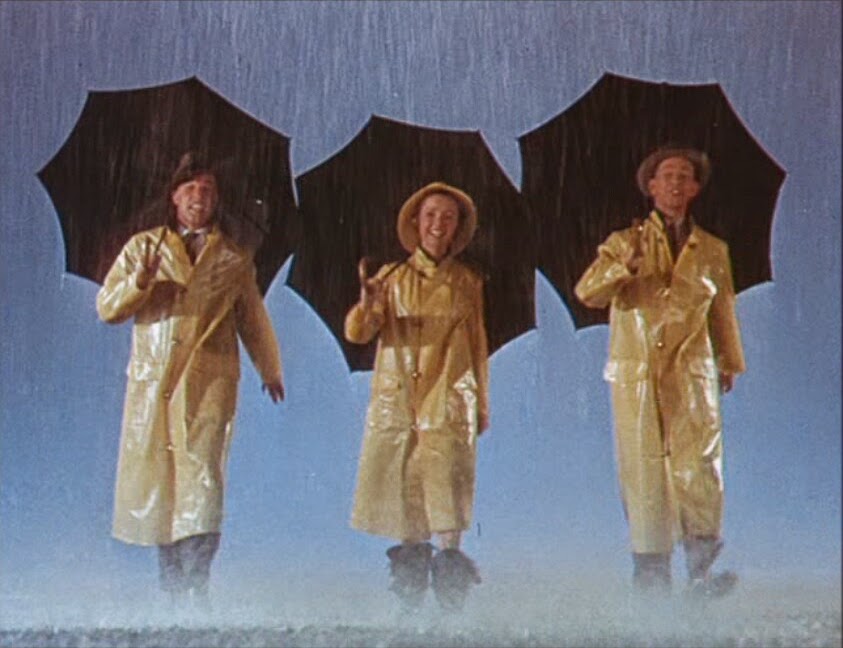 So anyway, where was I? The four nine-letter downs are all lovely. HERCULEAN (30D: Almost impossible, as a task) might be my favorite, but they're all nice. And little, unusual fill is all over the place - MORPHS, PROPEL, GIMLET, RAMPART, TROVE, BALMY… well, maybe not all over the place, but certainly those NE and SW corners are full of great stuff. AROAR (10D: Loud, as a crowd) kind of sticks out like a sore thumb, but it's not that bad, I guess. It makes me think of Al Michaels, for some reason. Can't you just hear him sayin' that "the crowd is aroar" at some football stadium? (I feel like I've said this exact thing before...)

But back to the theme - I notice that the first and last, and the two middle theme answers are related. The outer ones deal with breakups, and the inner ones are famous dance numbers! And the revealer is one of the funniest and cleverest I can remember in recent weeks - MISSING (38D: Lost … or, in two words, an apt description of 17-, 24-, 47-, and 59-Across).