Well, I got the theme with HERCULEPOIROT (23A: Fictional character who "died" in 1975), not because I knew when he died, but because I had a few crosses and I saw that the name fit. I put in LITTLEGRaYCELLS (39A: What 23-Across thinks with (as illustrated in this grid)) without any crosses, but, as you see, I had it spelled wrong. I also guessed "AdAms" where OBAMA (28A: President born Aug. 4, 1961) belonged, because I was going much too fast, saw the "4" in the date and assumed that it was asking about presidents who died on the fourth of July. Oh well. Incidentally, Calvin Coolidge was the only president to be born on July 4. You can thank me for that little tidbit later. 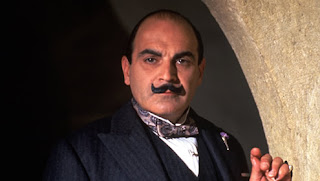 I'm not sure I love EGGSHAPEDHEAD (50A: Notable 23-Across feature), but maybe I'd like it more had I actually read the books, instead of just watched the PBS Mystery versions. Does she mention that characteristic? Probably. And looking at the photo, he does kind of have an egg-shaped head... but don't we all?

AGAPE crossing AGAZE right up in the NW is a little troubling (can we make it a trifecta with ALOOP?), and the NE is not much better with MACAW over ENOCH. Really, aside from the dense theme and the two longish downs COCKTAILS (11D: Drinks before dinner, maybe) and STILETTOS (33D: Pointy heels), there's not a whole lot going on here. And although I love the word APERCU (4D: Cursory glance), I really dislike the clue. It's not just a cursory glance, it's something perceived in that first look. It's an insight drawn, not the action of looking. Isn't it? Finally, THRACE (49D: Ancient land on the Aegean) is fun. Overall, though, meh.