Hmm… I see another theme developing this week - NABOB is in again for the second day in a row, and it's almost as though the clue were pulled from yesterday's review! "35D: "Nattering" sort in a Spiro Agnew speech." Hah!

The big surprise today - STROHS is a classic beer! Ha ha! Oh, wait, I meant to say that the surprise was that it was once brewed in Detroit. I guess I thought of that as a Wisconsin product, but perhaps that's because I was in Wisconsin when I used to drink it… I see now that the same brewery at one time or another also put out "Old Milwaukee" and "Lone Star." Strange. 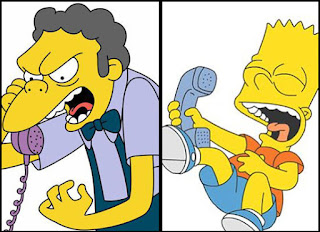 I recently disliked a "circled letter" puzzle, but this one, I think, is better executed. The letters P, O, R, and K are spread out across each theme answer. Sure, one of the answers uses the much-maligned "one's" construction, but the other three are fine, and the revealer is positively mouth-watering. Mmmm…. PULLEDPORK….

Tell me, how many of you tried to enter "Santa" at 1D: Reindeer herder (LAPP)? And when I first looked at ATONCE (12D: In a New York minute) I had a "kitwo" moment and thought to myself "Is a tonce something like a trice? Heh. What a maroon.

A decent enough Tuesday. Some stuff that's a little OLDHAT, but hey, they got UBER in there, and the theme is fine. Onward!