Interesting theme today. All the theme answers use only letters that appear the same when viewed in a mirror, or, put another way, they exhibit SELFREFLECTION (11D: Activity on Lent or Yom Kippur ... or a quality of every letter in the answer to each starred clue) (What a pity that the word itself does not exhibit it). And it's only fitting that they should appear vertically, so that their shared quality should be better appreciated. As answers, they're all decent - good even. I like the irreverence of TOMAYTOTOMAHTO (3D: *"Same difference"), and the colloquialism of THATAWAY (38D: *Where "they went," in old westerns). So thumbs up for the theme.

There's a lot of theme material today, and many of the crosses hit two or three of the theme answers, so I guess it should come as no surprise that we see a word neither Frannie nor I have ever encountered before - PANGOLIN (20A: Scaly anteater). 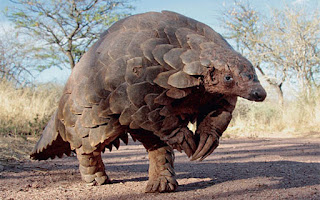 Let's talk for a minute about the PANGOLIN, shall we? First of all, just look at it! It's positively prehistoric! But it's a mammal. The only scaled mammal. Second, it's about the size of a house cat, and its tongue can be longer than its body - about 15 inches! Freaky. It is also, according to one source, the most hunted and trafficked animal on Earth. The scales, meat, and blood are apparently prized in Asia. Some say they have healing/medicinal properties. As a result, it is listed on many endangered lists, except that no one really knows for sure how many are left in the wild. So thanks, Mr. McCoy, for bringing this little guy to our collective attention!

After that, I don't have much to say. Glancing at the grid just now I see such GLORIOUS answers as MIASMA (22A: Unpleasant atmosphere), MAHIMAHI (56A: Fish also known as a dorado) (also did not know that!), TOEHOLDS (41A: Points of entry), and STACHE (50A: Something just under one's nose, slangily). Tons of threes, but I don't care. I even enjoy the crossing of OMAHA and TOPEKA.

I declare this an excellent Wednesday.