I liked the top of this puzzle, but when I got down to LOAMSOIL (49A: Planter's bagful), I cringed a little. And then I was stopped nearly dead in my tracks by HANSARP (51A: Sculptor who pioneered Dadaism). I know of Jean Arp, sure, but who's this Hans? Well, I'm a little embarrassed to admit that I either never heard, or didn't remember, that it's the same person. He was German and French, and when he referred to himself in German, he used the name "Hans," and when in French, "Jean." That, in itself, just seems so, so, Dada, and I am quite happy to have learned it from this puzzle. Also on the bottom was the unfamiliar-to-me OSBORNE (58A: Playwright John who wrote "Look Back in Anger"), but you can't argue about stuff you don't know. Especially not authors of pretty famous books (See also: AMOSOZ), and internationally known artists. So that leaves me only LOAMSOIL, which, I argue, is either "loam" or "soil," not both. It's also probably more commonly delivered in trucks than bags. I've seen soil in bags referred to more often as "topsoil," and even though it's basically the same thing, it's a detail that seems significant. 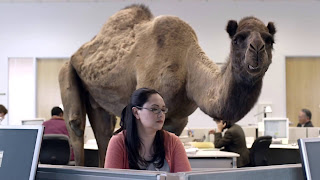 But why am I grousing so much? The rest of this is pretty damn good. SOLARPANELS (12D: Modern energy sources), HOMECOMINGS (24D: When some kings and queens are crowned), YESWECAN (7D: Campaign line of 2008) (If Frank Sinatra says it's okay), and GAMESHOW (35D: Password" or "Pyramid") are all very good. I would have preferred a garlic clue for SCAPES (43D: Outdoor painting scenes), but BANKALARM (20D: Sound during a heist) brought a smile.

The HUMPDAY theme was an odd one, with four CAMELs strewn throughout the grid. They didn't seem to cause much straining in the fill. Maybe EBONS. And although BAHAI, OUSE, and OMAN are all legitimate, they are also a little crosswordese-y. And speaking of crosswordese, it's an interesting clue for OSLO (6D: World capital half of which consists of forest) today.

Overall, thumbs up. A good Wednesday.