We spent an awful lot of time today up in the NW corner. RAYE (2D: Comedian once called the Female Bob Hope) next to IVES (3D: "A Little Bitty Tear" singer, 1962), next to SYS (Awacs component: Abbr.), next to HJHEINZ (5D: "It's red magic time!" sloganeer, once), next to JOANNE (6D: Part of J. K. Rowling's "J. K.") was a pretty tough block. Even after I knew it was Heinz, I wasn't sure about the HJ part, and what's the story with Awacs not being in all caps? Was that a mistake? It Googles up with all caps. Luckily, Frannie knew JOANNE, and she had also heard of Martha RAYE, but only after we got the whole thing. And AES (19A: J.F.K.'s U.N. ambassador) is pretty tough, too! 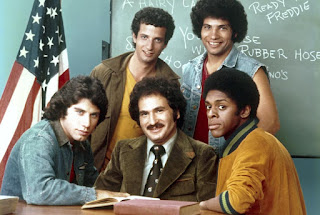 Anyway, that probably took us half the time today. The rest of it went along fairly smoothly. 12D: Not pass the bar? (RUNAGROUND) is pretty nice, as is 37A: One fixing flats? (TUNER). Not even on Saturday will they lose the questions marks, though. Oh well. Pretty tough clue for KERN today, using the second definition - 31D: Typeface projection. And speaking of tough, I left "twisT" in for quite a long time for "27D: Oliver of stage and screen" (PLATT). Who's ever heard of Oliver Platt? Oh wait, I just looked him up. I know that guy! I guess I just never knew his name. Oops! Sorry, Mr. Platt.

52A: One playing to the balcony? (SERENADER) (again with the question mark!) was cute, as was 39D: Inn in an inlet, say (BOATEL). Frannie and I once stayed in a BOATEL, or, really, a "bostel," because it was actually a youth hostel that was housed on a boat in Stockholm. I wonder if that's still in operation?

Anyway, some clues were pretty obscure - JUNIPEROIL (26D: Aromatherapy option), LUISE (23D: Rainer of "The Great Ziegfeld"), and that whole NW - but overall, the fill was high quality. Thumbs up.