Frannie and I passed this one back and forth on the porch, so we don't have a "time," but we were able to work pretty much "cleanly" from NW to SE, only getting caught up in the middle bottom area. Neither of us "knew" the term SCAREQUOTES (50A: Marks of derision), but we were both "happy" to learn it. 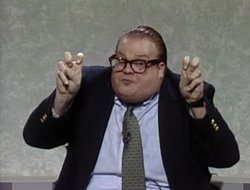 Still, we guessed correctly (what else could it have been?) so we avoided the Saturday FWOE. Phew!

Not as "open" a grid as one sometimes sees on a Saturday, with lots of medium-length fill. I didn't particularly love the NW, with its EARFLAP (3D: Feature of a bomber hat) and XBOXONE (2D: Microsoft release of 2013), but I wouldn't go so far as to say it ANNOYED (1D: Got to) me. OXFORDCOMMA (20A: Much-debated grammar subject) (I'm for them) was nice coming out of that stack, and through that runs the always welcome BRUCELEE (6D: He died while filming "Game of Death").

In the SW we have the equally always welcome SEXAPPEAL (42A: It) (Nice clue!), and to have it share a letter with STEAMY (42D: Blue, say) is just icing on the cake. WEIRDAL (36D: Big producer of novelty records, informally) and AXLROSE (37D: "Sweet Child O' Mine" rocker) make stranger "bedfellows" in that quadrant.

TERMLIMIT (8D: Restriction for some offices), EXOTICA (39D: Things rarely seen), FOLKHERO (26D: Romanticized figure), and HATCHECK (38A: Where a bowler might go on a date) were all quite nice. TINCT (30D: Color) is a bit of a stretch, and CAMERON (40D: Brown's follower) and KNESSET (41D: Mideast diet) were tricky!