Animal expressions make up the theme material today. Pretty neat that Ms. Burnikel found four that would work symmetrically, and two of them are fifteens! It's kind of fancy to have two fifteens on a Monday, isn't it? 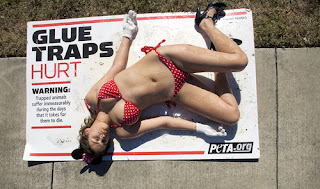 It's odd, though, that a puzzle focussing on animals would contain a reference to a product that has been deemed to be "Cheap, cruel, and indiscriminate" to animals by the Humane Society of the United States. I know that the puzzle editor probably does not want to take a stand one way or the other, but by casually cluing DCON with "16A: Rodenticide brand with glue traps," the idea is treated as normal. I would have liked "Maker of controversial glue traps" better, but if you want to skirt the whole thing, just say "Rodenticide brand" and leave it at that.

Moving on. I thought DCUNIVERSE (11D: Where Batman and Superman live) was a nice answer, and opposite that, the full PEARLSBUCK (30D: "The Good Earth" author) is also fine. The clue for ENTER (34D: Another name for the return key on a Mac) seems a little odd. I'm writing this on a PC, and my "return key" says "Enter." Was this puzzle originally constructed in the 1980s? Do any keyboards still say "return?"

My first answer was CAMP (1A: Group of tents in the woods), which I will give a B+. I like the clue. Interesting trivia about PUTIN (37A: Foreign president with a black belt in judo).

Overall, except for that one large problem about the glue traps, it was fine.