A great big howdy from the American Crossword Puzzle Tournament! I came back early from the wine and cheese reception to try to get this review in under the wire. I had better get down to business.

The shortz of it is that this was a toughie for me. I looked at it on and off during the three hour drive and kept chipping away at it. Sadly, the errors came in the only section I completed (or thought I completed) with ease - the south east. I dropped in the acrosses without the looking much at the downs, so I didn't notice that my erroneous TimEDELAY at 56A. left 47D. with PUmIL instead of PUPIL and DiRE instead of DARE. Derp.

On the upside, I was happy that I was able to complete the grid because at first, I thought I was doomed. ATEIT in the north east held me up for a time over there. The two names at the bottom of the south west stack (RAIMI and INNES)were complete unknowns, causing trouble in that section. Oddly, because I am always struggling with names of people I don't know, 39A. Judith with two Tonys got me going in the mid west. For some reason, I guessed IVEs, which, while not completely correct, was correct enough to kick start things over there.

At 23D. One of a hitched pair, I started with bride, then switched it to groom. When neither of those worked, I gave up on that idea, only to have it be HUBBY. Funny. Nice to see PHIAL in there, and its neighbor LEVIATHAN. I also liked Men's fashion shortcut (CLIPONTIE). I enjoyed 25A. Clip art? (BONSAI). I would have liked ASTERISKS better if I had figured it out sooner. :) 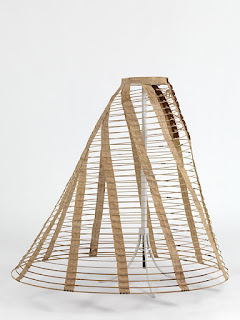 There was a lot of good stuff in this puzzle, but I did think it suffered a little from separations between the sections. Getting all the answers in the north east, for example, did very little to help me with any of the middle sections, and so forth. As our esteemed co-blogger has pointed out from time to time, when that's the case, it's like solving many mini puzzles - and not like the daily ones by Mr. Fagliano.