I had better tighten my ASTEROIDBELT and get this puzzle reviewed before midnight. ONEDAY I'll get it done earlier.

Mr. Berry entertains, as ever, with several clever clues. I especially enjoyed 11D. Has everything? OVEREATS and 13A. Heady stuff (ALE).

And how about the nice pair of clues in 10A. Hold up (ROB) and 49D. Pull down (EARN)? I also noticed the 5D/39D combo BEE HIVE, which may have been a fluke (or an EEL), but also possibly not. Another amusing clue was 28A. Sir in the Ruhr (HERR). I enjoyed BONEDRY as well (12D). 52A. Dachshund, colloquially (SAUSAGEDOG) is funny, although in my colloquy one more often hears them called wiener dogs.

We have MEDUSA back for the second time this week. Perseus had better get bizzay. I didn't recognize the names of either of Medusa's two sisters, so which one is really immortal after all, eh? Take that Stheno and Euryale.

I don't usually take note of the grid itself, unlike some of my esteemed colleagues, but today I did notice the one answer running top to bottom down the middle (SUMMERTIMEBLUES), which I thought was nifty. I tried to invest it with some significance relative to the rest of the puzzle, but I couldn't. Anyone else? 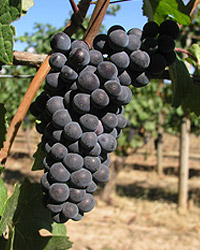 I don't want to be the QUEENOFMEAN, but there are a couple of clues I am critical of. The clue/answer pair 41D. Flickering light (STROBE) for one. Although, accurate, in a way, flickering is not quite how I would describe a strobe light. Also, AUTORACE for 33D. (Talladega event) seemed a bit obvi for a Friday puzzle, but perhaps I shouldn't look a gift horse in the mouth. Although my time for today's puzzle wasn't fast, I did complete it with no FWOEs - always a nice FEAT for me on a Friday.