"It took me longer to complete the puzzle than I thought it would," said Frannie uneasily. "I did finish it without errors, though," she continued unmistakably.
Okay, so I like a Tom Swifty. Once I started I couldn't stop, but I won't include them all, I pledge sparingly. Of the TAYLORSWIFTLYs in this puzzle, I thought HOWARDSTERNLY was the best, and probably the most accurate. :)

There were other elements of this puzzle that I enjoyed. HEIR for Next in line (14A) was a nice one. The Great Tempter (SATAN) at 33D was another nice one. I like the words PRONTO, PESTO, SPORADIC, and BALK. And I thought the H.L. Mencken quote at64A. was humorous. "A man who, when he smells flowers, looks around for a coffin" (CYNIC). Ha! 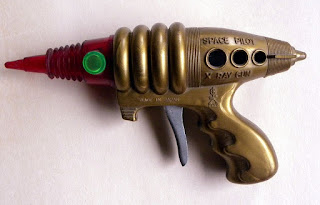 There were three clues I didn't much like, she said DREIly.
22D. Munch on (EAT)

48D. What stars are in the night (SPECKS) -  I don't really associate the words stars and specks. I had SParKS in there at first, which seems more star like to me.

27D. Measuring cup material for PYREX seemed a little odd to me. Isn't Pyrex a brand of kitchen ware formerly made of borosilicate glass and now made of soda-lime glass in the U.S.? In a nice coincidence, borosilicate glass was first made by OTTO Schott. Maybe they named the schott glass for him. :)

I'll stop banging on here to leave you a little time in your day to hop over to the "Function" section of the Wikipedia page about ray guns. It's a fun read.

And, in case you didn't get enough of my own Tom Swities, here are three more, she offered serieously...
"I'm feeling better for the first time since my girlfriend left me," he said wholeheartedly ; "I go to the same bar every week," she said frequently ; "Let me see that fruit in your hand," said Adam, NAIVEly [nigh Eve ly].