When I first opened this grid, I saw it as a close-up of a cartoon gorilla face. The top two segments being the eyes, and the horizontal line the mouth. No? You didn't see it that way?... 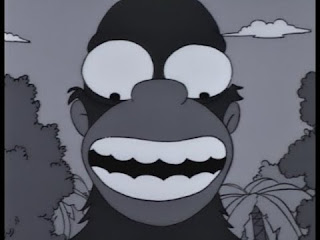 Anyway, it kind of cuts the grid into three separate puzzles. The largest one and the top right went pretty quickly for me, but that upper left gave me a beating. I ended up guessing incorrectly at the cross of 17A and 4D, but later, I learned a little about VANUATU, a Pacific land west of Fiji, so that's nice. It's a republic made up of about 80 islands, with a population that is just over twice that of Stamford, CT. Another thing, though, that I'm not really sure whether or not I learned, is that three capital Ts can be used as a clue for the word TRUES. Is this because sometimes T is used in opposition to F to indicate a True/False question? And will we now see such clues as "Y Y Y" for "yesses" and "N N N" for "nos?" Is that what's going on here, or is there another explanation?

I think I might just be a little grumpy because I made a mistake in one of the "fun & games" puzzles last night. I'm here at the American Crossword Puzzle Tournament, and on the first night they have a few puzzles that people can do in a group setting as warm-ups and ice-breakers. Making a mistake in one shouldn't matter, and I keep telling people (and myself!) that I'm trying to get all of the mistakes out of my system before turning over the first real puzzle at 11:00 today, but am I? Or am I completely losing it? Last night I had a rather extended dream in which the engine was removed from our car while it was parked somewhere. Is the car engine a metaphor for my brain? Has it been removed from my head somehow? ... quite possibly.

I very much enjoyed the clues for ALIENS (Ones supposedly eligible for, but never yet seen in, the Miss Universe pageant), LAWYERS (Some deal with trust issues), and LEMONADESTAND (Ten-year-old business, say). Those are really quite good. Less perfect, I thought, were JAW (Speaking part) (I get it, the jaw is the part that moves, but other areas are really the ones that do the speaking. Think of ventriloquism!) and CLAMUP (Hush one's mouth).

But onward and upward! It's time to start getting ready to leave the hotel room and go down to face the big digital clock. Good luck to everybody who's here competing. I hope all of us have gotten all of our mistakes out of our systems. :)