This puzzle's theme answers are movies that have been categorized as SLASHERFILMS because they have titles that feature the slash punctuation mark (or similar - turns out the slash comes in *quite* a variety of styles). Today's showings included VICTOR/VICTORIA, FROST/NIXON, and FACE/OFF. I entered VICTORVICTORIA right off the clue, but came up short, so I took it out. But, after I filled in a few downs, I saw that it *was* correct, and I could, once again, claim victory. Ha.

In a stroke of brilliance Mr. Adams, made good use of the slashes in the film titles in the crossing non-theme answers HE/SHE, AC/DC, AM/FM. It all had me wondering if MADDASH at 1A (Happening after doors open on Black Friday) was an oblique reference to the theme.

In other successes, I spelled SAOIRSE correctly right out of the gate. I hadn't realized I knew how to spell Ms. Ronan's name. I learned a couple of other things from today's puzzle as well. I was not familiar with the word LOESS ("Good earth") - I hope that one comes in handy this weekend at the ACPT! I had also never heard the expression "Spill the TEA" to mean "dish out gossip." And, I thought it was interesting that the answer to "Like butterscotch" was color-based (ORANGE). I didn't see that coming. Also in that corner, I thought I was feeling bLUe for 65A "Down in the dumps") until I finally came up with GLUM. :)

We always like the word HIE. I also liked REDFLAG. I thought DOTTIER ("More eccentric") was a bit unusual - in a good way. The clue/answer pair "Like some cuisines" (ETHNIC) brought to mind a quote by Robert Louis Stevenson that I read recently: "There are no foreign lands. It is the traveler only who is foreign." 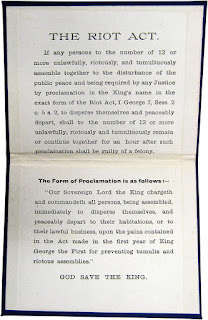 Interesting bit in the clue about the HRE, but as fill, it's kind of bland. As an ASIDES, entering OED at 51A: "Its second ed. contains about 59 million words" made me wonder if the clue referred to the number of defined words, or word words, including the ones in the definitions.

There seemed to be a quantity of fractional words like MAV, DEC, ARR, ETAL, REFIS, and ALUM, but, overall, a solidus Thursday!