Well, this Saturday offering was almost as easy as pie, but it had one or two curves that gave me a little strudel. I couldn't get 1A right off, but the next two Across answers, SEASHANTIES and CHARLOTTESWEB, went right in, and then I was on a roll.

I worked my way from top to bottom. The short answers in the center were generally straightforward, with the sweet spot being the center. I did come up empty at 48A with "Winner of the 1955 Pulitzer Prize for Poetry" (WALLACESTEVENS), but I was able to fill that in after I got a few downs.

Then, it was time to circle back to the top. My only real set back was at the very top of the roll. I am not familiar with the "Hit FX police drama of 2002-08." I didn't know 4D: "Japanese instrument with 17 bamboos pipes" (SHO) or 9D: DEWITT Clinton (or is it Clinton DEWITT?), and I wasn't too sure about the football abbreviation at 6D. Plus, I was, at first, duped, as intended, by 5D: "It may be measured in gallons" and I started with vAT. That left me with three empty squares and a mistake up there, making even a guess at the show title difficult. Eventually, I got INT ("Defensive football stat: Abbr."), and I corrected vAT to HAT - ha! - which was the breakthrough I needed for THESHEILD.

In addition to being led down the garden path by 5D, there were a few other forks in the road where the "obvious" answers were wrong.
"Crop grown in paddies" (TARO) -  I went with rice, at first.
"In which you might see an exchange of bishops" (SYNOD). Chess anyone?
"It might be taken to the pound" seemed similar, but none of the obvious answers (cat, dog, stray) had four letters. It turned out to be REPO.

My tenth grade English teacher, Mr. Fernandez (hi!) would have been proud to see me drop in WAS at 34A. He made us memorize the beginning of "A Tale of Two Cities." He told us it would come in handy at cocktail parties when we got older. It hasn't come up over drinks yet, but it served me well in the puzzle today. 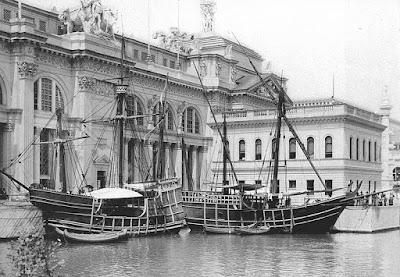 Both long answers (SECRETWEAPONS and BEERBARRELS) in the east were solid. I was very happy to see our old friend EEL in the puzzle again. It's been too long. :) ERR was on hand, too, just like old times.

But the icing on the cake were the question mark clues including "Hatcher of plots?" (TERI), "Union busters?" (DIVORCEPAPERS), "Gets to the point?" TAPERS, and my favorite, "Ones in funny shorts" (STOOGES) - LOL.

I found it odd that the acronym NSFW clue didn't call for an acronymic answer (LEWD), and I'm not a fan of the word PURTY. I do love a SWISSROLL as much as the next guy, but I've never seen one in a shop that actually called itself a PATISSERIE. Perhaps I should spend more time in Switzerland.