Today we have that rare bird, the asymmetrical puzzle. And for what? So we can have another ANOMALY, a two-letter answer. And to top it off, the two-letter answer isn't even a word, it's a picture! Unfortunately for me, I didn't really understand that while I was solving. I just entered the Across answers and moved on, so when all I had left was 31-Down ("I bet these flavors taste great together!) and found "_OV," I filled in the O of MOA (Extinct relative of an ostrich) and hoped for the best. And what do you know, it was right! 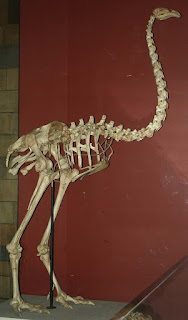 As it turns out, and as was probably obvious to most other solvers, the OV, OOV, and OOOV answers represent SINGLE, DOUBLE, and TRIPLE SCOOP ice cream cones. And three flavors are stacked up in the middle, VANILLA, CHOCOLATE, and PISTACHIO. Mmm... Coincidentally, my first gelato cone over here in Italy had scoops of Vanilla and Pistachio. Is it another coincidence that OPIATE (Morphenelike drug) is found in a symmetrical theme spot? I think not! Unfortunately, AORTA is also in what could be a theme position, but let's leave that one alone.

I was tricked and amused by EDISON (Tesla competitor), thinking not of the actual inventors, but of possible rival car companies. And the clue for COLUMBO (Detective show whose premiere episode was directed by Steven Spielberg) was shocking! Is that really the Steven Spielberg? I would have thought he was too young. (But no, he was 25.)

Toward the bottom of the grid we run into quite a few three-letter answers, but nothing too terrible. Overall, I applaud the oddness of the puzzle. The theme is dense, and there's plenty of interesting non-theme to go along with it. I think that tonight will probably have to be another gelato night. :)