Greetings, Dear Reader! Horace here, taking over after two weeks of excellent reviews from Frannie and Colum. From the heights of humor and erudition, you now get a week of grumpery from this LAZYBUM. So let's get right to it. 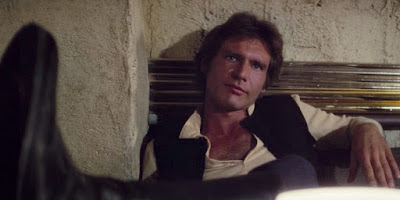 My reaction today was "Too clever by half," as my mother-in-law used to say. I generally like word games - I do write a crossword blog, after all - but this morning the nonsensical all-cap clues got on my nerves quickly. "GAZACHO," for instance, yields SPLITPEASOUP, and you see that and you think ok, it's a soup, gazpacho, from which the letter P has "split." Clever, yes, ok. And really, they're all clever. "ENTURIES" uses LONGTIMENOSEE ("centuries" is a "long time" but there's no C)...

It's nice that Mr. Trabucco found eight phrases containing a "dictated letter" (and by the end there are even two "spoken letters" in the answer - AREYOUWITHME for "RUMYSELF"), but I guess what I don't really like is that the clues are nothing more than creations that cannot stand alone. Too picky? Perhaps. I guess they're essentially rebus puzzles - the old kind, not the multiple-letters-in-one-crossword-square kind. I used to like those, so maybe I should lighten up...

So that's some grumpiness for you, to get the week (and the month!) started. Now let's look for some TRESBON material. How about "Something that's not easy to blow" (SMOKERING). That's a non-QMC that's a BARRELOFFUN. Another non-QMC I loved was "Obstacle-free courses" for EASYAS. Hah! And on the other side of the coin, we have the fun QMCs "Happening again?" for RETRO, and "Rock standard?" for CARAT. I also enjoyed "Help line?" for SOS. We did just see that answer clued as "Help wanted sign" (non-QMC) on Friday, though, which made it easy to get today.

The "false capital" in "John, to Lennon" confused me for some time before LOO became clear, but I wasn't fooled at all by "Old Spanish bread" (PESETA). Frannie and I, back when money-changing in Europe was a big bother, left Spain with only three PESETAs between us. This was before international ATMs, when you had to go to a bank or the American Express office to change travellers checks. Remember those? Sheesh! We were kids, and we didn't have much money anyway, and you seemed to lose a little every time you went from one currency to another, so the trick was to get only what you needed in each country. Anyway, that was our best one. Three PESETAs back then was mere pennies.

Where was I? ... I had never heard of a KILLFEE (Payment to a freelancer for unpublished work), so that was interesting. And "Annoyance for Santa" (SOOT) was amusing. So on the whole, still an enjoyable solve.