I had a moment of wondering about the spelling of FORGONE when I got to 40-Across, "Relinquished ... or a hint to ...," but my Random House says "forego" means "to go before" and "forgo" means "to abstain or refrain from; do without; give up, renounce, or resign." They list the same Old English forebear (also: forbear) in both definitions, but I guess the two spellings drifted apart over the years. 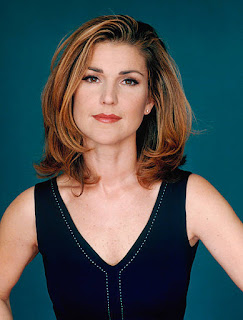 But really, only one can work here. The other would ruin the joke of leaving "for" out from the four theme answers, so let's just leave the spelling issue aside and move on, shall we?

While I was solving this, I sensed that something was off, but I was in such a rush that I didn't allow myself time to consider what was going on. Even when I got to the central (second day in a row) revealer, the spelling question entered my head, but I pushed it aside and moved on without thinking of anything else. Also, in keeping with the "haste makes waste" theme, I forgot that "year" in Latin is masculine, and so I ended up entering the accusative rather than the nominative, which left me with the MImSES department. And while that is somewhat amusing, the lesson is, I've got to slow down!

Also, I like the clue "Department store department" for MISSES. It reminds me of the humorous "Department of Redundancy Department."

Now, even when I am at my leisure, I still CANTSAYSURE what my favorite themer is. The clues are all so absurd! Maybe FISHCOMPLIMENTS ("Your fins are nice" and "You're a graceful swimmer"?).

The cross of OLIO and OLEO was amusing in the NW, and in other areas I could feel the week getting harder as I filled in CAHN, COHAN, PAPAW, the gross SWOLE (Bulging with muscles, in modern lingo), and, eventually, LAALAA.

Tomorrow, I will commit myself to slowing down and enjoying it, just like I've been doing with this whole "work from home" thing. I got to a point about a week or so ago where I decided that I love it. I've been doing more house projects, I've been reading a little (rare for me), and I've been fretting about work less. We'll see how long that lasts.