A smooth Saturday from Mr. Charlson today with a central 13-letter stagger-stack and some fun 9s and 10s. Of the three stair steps, I like PAWNPROMOTION (What it takes to become a queen?) the best. GOESONABENDER seems appropriate for the weekend, but BARNEYSTINSON is a name I've never heard before, having never watched Doogie's other show. Luckily, the crosses were fair. 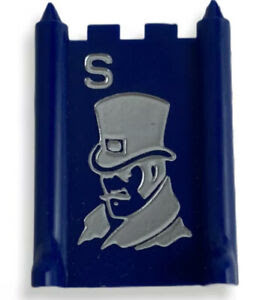 And speaking of those crosses, I thought it interesting that "facade" fit where VENEER belonged (False front).

In the mid-length entries, we have the somewhat aggressive INYOURFACE ("Take that, loser!"), and the seedy OPIUMDEN (Hangout for Dorian Gray). But we've also got that Italian hero Giuseppe GARIBALDI and the well-known baking hero, the KEEBLERELF.

SASSIER (Flipper) got a cute clue, but I thought "Herb of the parsley family" was a little lackluster for ANISE. Something like "Absinthe flavor" would have tied in nicely with OPIUMDEN. And SCAD (Great deal) is just plain wrong. It's never singular. "I've got a scad of them, help yourself!" said no one ever.

I did like BOOMTOWNS (Gold rush phenomena), and "British flier" (UNIONJACK) had me stumped for a while, but overall, I found it a little LESS exciting than I was hoping for when I saw the byline. I mean, it's fine, it's just not EPIC.

Posted by Horace Fawley at 8:58 AM