The review's a little late because there was a new addition to the household here in Albany today. A little fluffball joined us: 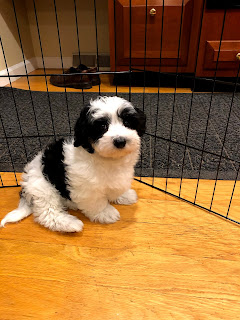 ANDSO. Another reason to be happy this week, even outside of the New York Times crossword puzzle.

Today's themeless is quite smooth. I really didn't see anything that I would say went SPLAT, with the possible exception of DESC, which is an odd abbreviation. I suppose you might run out of room at the bottom of the page, and simply write in "below here, desc." Hmmmm. I'm not convinced.

I feel certain that the seed entry came at 25D: More familiar term for omphaloskeptics (NAVELGAZERS). Turns out that the Greek word skepsis means perception, or reflection. Which works out well here, but then you wonder how that turned into a term for doubting. I suppose that the person reflecting is allowing themselves to perceive the reasons why something might not be true. How very philosophical.

PHILISTINES, on the other hand, is cognate with Palestine, and simply refers to the inhabitants of that area. However, Wikipedia states that the common usage we currently come across, as in the puzzle, instead derives from an argument between two towns in Germany. I continue to be unconvinced.

Some good clues today, such as 13A: Loaded questions? (BARTRIVIA); 26A: Strip at the beach? (TANLINE), and 65A: Pickup order? (TAXI). Entries I enjoyed included YEOMAN, ARIEL, and EARCANDY.

Anyway, I enjoyed solving it, and now back to the pup.