Well, this puzzle was certainly in my "Wheel" house, although I admit to being a bit concerned when the third Down answer in the northwest gave me MRVG as the start to 18 Across. I took the G out, even though I was pretty sure IDIG was correct ("Understood, man") because while I could imagine MRV being the start of mister somebody or other, I couldn't make any kind of a case for MRVG. That all changed when I got to 13D and saw CANIBUYAVOWEL ("What you might cry when trying to answer the six starred clues"). In a SNAP, the theme made sense and I was able to complete all the vowel-less theme answers related to America's Game(R): WHeeLoFFoRTuNe. Mr. Angell managed to squeeze in MeRVGRiFFiN, VaNNaWHiTe, and PaTSaJaK, not to mention BanNKRuPT and the six "free" letters supplied to all solvers, RSTLN. When Horace and I were in college, he made me a pin that read, "Can I b_y a vowel?" (see below) because I found it maddening when contestants would buy what I considered to be unnecessary vowels.

I thought the clue "Turn in a popular game show" (SPIN) was a nice touch. Probably unrelated, but similar in a way, we also have HGTV and BFFS. In something of a contrast we have TIEIN and DIEOUT, both of which are stuffed with vowels. 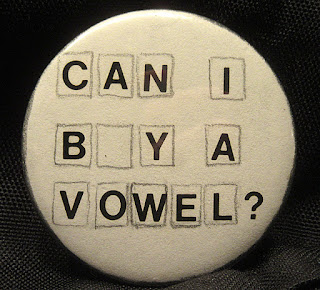 I liked BLISS for "Ignorance, perhaps" at 1A, as well as both the clue "Chump" and the answer SAP. README ("File accompanying many a download") went right in. Nerd much? :)

I was duped briefly by the clever wording of 13A: "They turn on machines" (COGS), first trying to think of some version of an on/off switch. "Round things?" (BEERS) was also clever, but my favorite was "Shot that's within your reach?" (SELFIE). Also, it was interesting to learn that the UAE has no rivers. Who knew? And last, but not least, I appreciated the Martin Luther King, Jr. quote, "No LIE can live forever." So be it.