Quite a few twists in today's puzzle, from the shape of the grid to the many clues that could be considered from a number of angles. Some of the cleverly ambiguous clues had me saying, WHATSTHEBIGIDEA? when my first guesses turned out wrong. I discussed a few of the clues of this type with Horace and it was interesting to see which ones we caught on to right away and which had us headed down the wrong PATH. Here's my list:
"One with a nest egg" (HEN) - twigged
"Result of a good pitch" (SALE) - twigged (good one!)
"Not fast" (EAT) - did not twig (my favorite)
"Give a hand" (DEALIN) - did not twig
"Filled in some gaps" (CAULKED) - twigged
"Bugs" (NAGS) - did not twig
Sometimes you have to LEGO of your first TRIS or end up with a SADFACE. 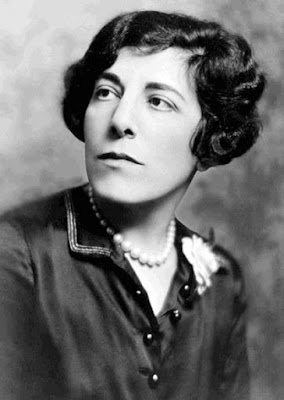 The puzzle featured significantly fewer QMC's. I found "Pop around a lot?" (STAYATHOMEDAD) mildly amusing, whereas I liked "Mower handle?" (DEERE) quite a bit. The C/AP "Voluptuary" and HEDONIST is very good. Did TENUTO put anyone else in mind of Menudo, or is that just me?
~Frannie.
Posted by Frances Page at 2:22 PM