The EXTRACHARGE theme adds 'ION' to common phrases which are clued in an amusing manner. My favorite, IRSAUDITION, is a "Job interview for a wannabe tax collector." Although, based on reports from people who've had 'em, I'm positive it would not be a favorite without the ION ending.
For "Starts hearts" at 13A, I tried 'leadS', which is kinda funny because it's an anagram of the correct DEALS. EASEL at 3D for "Studio supporter" is good. I also enjoy an IDIOM and a Yogi BERRA quote, making the north west a top corner for this solver. Elsewhere in the puzzle, I enjoyed the clue "Male delivery" for BOY in the northeast as well as "She might give you her coat" (EWE) in the south east. 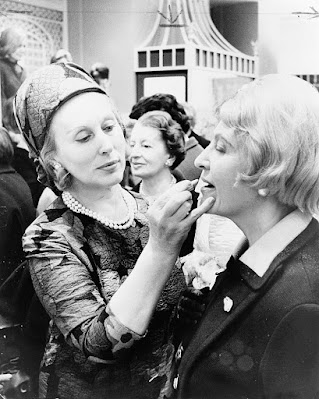 The southwest was more ALIEN to me. I thought "Spout (off)" was an odd clue for POP. I also thought 64A: "___ dye (chemical coloring)" at 64A was a bit far out for a Tuesday, especially as it was crossed by two of the trickier clues in the puzzle: the excellent "Go out briefly?" (DOZE) and the old timey "It can carry a tune" (IPOD). If you hadn't run across any AZO dye recently, you could end up in a real PERIL. I don't mean to sound negative, it's just that reviewers do have to keep an eye on this type of thing.
~Frannie.
Posted by Frances Page at 8:03 PM