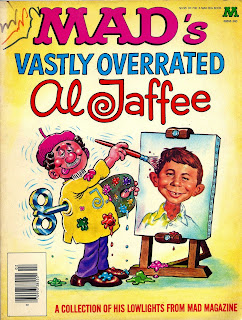 Well, this is lovely. MAD Magazine played an important role in the development of my sense of humor, such as it is. (Frannie might suggest that it played a part in my appreciation of humor.) I had older brothers, and there were SCADS of MAD magazines SECRETED away up in the attic, where their rooms were. After they went to college (when I was still pre-teen), I would sneak up there and rifle through them. There were a few National Lampoons in the stack, and they held some appeal to a young boy, but MAD was funnier. Even my father enjoyed MAD. I remember he was AMUSED by "The Lighter Side of ..." by Al BERG, even back then, and it made me very happy when he starting subscribing to MAD in his late seventies or early eighties. Partly it made me happy because he would give them to me once he had read through them, but also, you know, it's kind of cool to think that A. I could tell my friends that my dad subscribes to MAD, and 4. That it was still being published!

If one person more than any other comes to mind when one thinks of MAD, it is Al Jaffee. He turned 100 yesterday, and it's nice to know that he shares a birthday with none other than ... this blog! That's right, HAFDTNYTCPFCA turned 9 yesterday! Where does the time go? Anyway, if we keep this up for half as long as Jaffee did at MAD (he was a contributor to the magazine for 65 years!), it will be far too long.

So the title, again, is perfect. I don't know how the research was done to find the predicted items, but I tip my hat to Mr. Stulberg. I also appreciated the bonus items - the aforementioned BERG, the "Spy vs. Spy" clue (ENEMY), the "Finding it funny" and "Droll" (WRY) clues, INANE, "Such FUN!," and maybe even "Cartoon speech bubble, often" (OVAL).

Posted by Horace Fawley at 8:59 AM