MUCHADO ABOUT NOTHING is the theme today. The circled words - synonyms of MUCHADO - circle empty squares. It turns out that the puzzle will be accepted if you write the entire word "nothing" in the squares, because that's what I did after I didn't get the congratulations screen. As it turned out, I had left IWiN and CEREBRi in place. The first seemed fine, but CEREBRO is actually correct for "Brain-enhancing device used by Professor X." 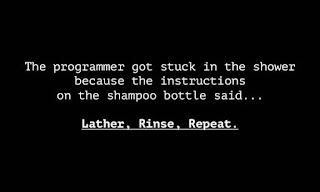 I like the unusualness of this theme. The holes in the grid, while slightly troubling, are neatly surrounded by circled squares, so it's ok.

As we have learned, any time circled squares connect to form a word, those squares are "triple-checked," as us crossword wonks say. Meaning they are used in three separate words. It's hard enough getting all the letters to work when it's just Across and Down that you have to worry about. Adding in a third level of complexity often forces a constructor to dig deeper into the ol' wordbag. Today, though, I thought Mr. McCoy did a very nice job of finding acceptable fill. ORGO (Notoriously difficult chem class) was something I had never heard (and I actually found organic chemistry to make more sense than inorganic!), but maybe it's been said before by someone. Elsewhere, there's that partial OFA (____ sort), and the crossword stalwart URI Geller, but that's not much.

Two things about me: I don't always cope well with hot peppers, but somehow I have come to love a squirt of SRIRACHA sauce on a simple pile of broccoli and rice. And in college, I had a radio program named the DEADAIR Show. It was the first show in the morning, and I was supposed to turn on the transmitter when I got in. Well... one day I forgot, and I didn't notice until I got a phone call about an hour into the show. Heh.

How cool is it that "Eleven plus two and twelve plus one" are ANAGRAM[  ]S? But on the other side of that symmetrical pairing - "What the Avengers do" is A[  ]SSEMBLE? Really? That's not the first thing I would have thought of. But then, I'm not an Avengers expert.

I think this was a fine Thursday puzzle. Something a little different, and a change is better than a rest, right?

Posted by Horace Fawley at 8:06 AM