The theme today takes five, two-word phrases, the last word of which means "choice," and clues for a non-standard interpretation of the first word. As in "Lager or I.P.A.?" for DRAFTCHOICE. Instead of young athletes being chosen, it's beer. SPLITDECISION isn't a draw, it's the difficult choice of "Hot fudge or caramel sauce?" on your banana split. I thought they were all good, and I doubt this was intentional, but I found that a word found in the row directly below each one could be incorporated into the theme too. For STOCKOPTION (Chicken broth or beef bouillon?) the answer could be ANY. I know, usually you'd want "either" if it were just two choices, but really - it's not even a thing, and wait 'til you hear the other ones! Like, say the server thought you made the wrong decision about the split topping, you'd say SOSUEME. And as for the beer choice, it's one you can't really BLOW. OK, I'll drop that idea. 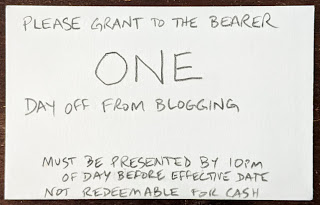 Or maybe it's in the line above that the answers can be found. For SHOTSELECTION (Jägermeister or Fireball?), the answer might be ILLPASS.

I TEHEEd at OFFPUT (Disconcerted). It's a funny word, and it reminded me of the crazy word order in Dutch, which I am trying to learn. The Dutch, like the Germans, I believe, have a tendency their verbs at the ends of sentences to put. MOOED (Participated in a stock exchange?) was also LOONY. And speaking of LOONY, do you think they considered cluing that with "____-Toons (onetime cartoon company)" to go along with "____-Barbera (onetime cartoon company)" (HANNA)?

And what about reading the NE corner as a short story? A man walks up to the bar and calls to the bartender STOLI! He gets the bottle, lets out a YAHOO, and proceeds to DROWN his sorrows. The end.

OK, that's probably enough out of me. Frannie had a very full day today so she handed in one of her chits, but she'll be back tomorrow to DECOCT further SETS of clues and answers. I'm just acting like the EMCEE and killing time ERE the talent is ready.

Posted by Horace Fawley at 7:54 AM