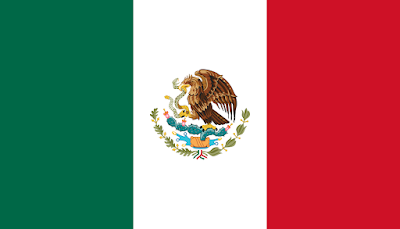 This struck me as a slightly unusual theme. One that basically just describes an actual object. Nothing to do with wordplay or taking only part of the theme answers ... it's just exactly what it says on the label. Not that I mind, mind you. I love a pinwheel theme, and I love flags, so if this theme were run up the flagpole, as it were, I'd salute.

Now then, since it is a puzzle about the bandera de México, let's talk a minute about it. The current flag (above) was adopted in 1968 - the year that the Olympic Games were in Mexico City. Before that year, some Mexican flags did not contain the central coat of arms so well described in this debut by Mr. Chow, and there was concern that without it, the flag would be nearly indistinguishable from Italy's.

In 1984, it was decided that the flag would have a definite "front" and "back." In official terms, it went from "front-facing" to "side-facing." That is, when looking at it from one side, the eagle faces left, from the other, it faces right. In 1995 another ruling was made that caused the eagle to do a little hop in the time it takes you to turn the flag over. On the front, he stands on his left leg and holds the snake with his right, but on the back he stands on his right and holds with his left. This, to at least one crossword reviewer, is an inelegant detail. Wouldn't it be cooler to have a more hyper-realistic image?

To wrap it up - the green (which is darker than the Italian green) is for "hope," the white for "union," and the red (also darker than the Italian, but less so) for the "blood of heroes." (How vivid.) The coat of arms depicts an Aztec prophesy that signaled the founding of their city Tenochtitlan (present day Mexico City).

So I'm afraid that's all the time we've got today. I hope you enjoyed this little sidebar into vexillology as much as I did. Colum's got his daughters, I've got the internet. :)

Posted by Horace Fawley at 8:16 AM