A nice upswing from the last two days today. I enjoyed this puzzle much more. It always helps to start off with knowing 1A right off the bat (1962 Kubrick film: LOLITA). I guessed 1D: Head incorrectly as Loo, and only figured out it was LAV towards the end. ONASLANT was correct, but even with these guesses in place, the NW resisted me. I got 33A: Inter ____ (European soccer powerhouse) (MILAN) next, and filled in a few 3-letter answers including AXE without understanding the theme.

I got ARACHNID, a lovely word in the grid, MAWS, then MGM, and GRIP and MALI. Finally, I understood what 9D: Metaphor for quick-spreading success (WILD[FIRE]) was asking for, and I was off and running. I didn't understand the theme, exactly, just that each of those black squares in the 2x2 square would be filled with an understood "fire". I had, in fact, noticed the odd looking congregation of black squares at the outset, and wondered if they would have something to do with the theme. 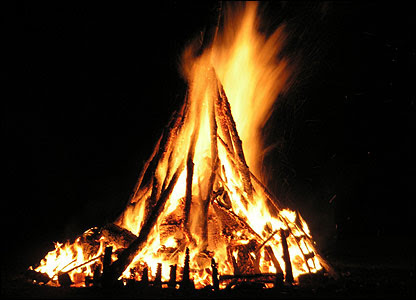 It made the remainder of the clues around those spots easy to fill in, which meant that the NE and the SW went quite quickly. I enjoyed the two longer themed answers  PLAYSWITH[FIRE], and [FIRE]INTHEHOLE, the latter being the revealer that makes the theme work. Very nice!

In addition, we get some nice entries in VASSAL (which I insisted on spelling "vassel" for a while, nearly leading to a FWOE, but I figured it out before putting in that final A), ARBORDAY, and POOLSIDE. AXON is very much in my line of workl, so I liked seeing that.

I very much enjoyed the clue at 57A: Goes on Safari, say (BROWSES), although I'm not sure the "say" is needed with the capitalized app name. 27A: Things with rings... that may be ringing (EARS) is pretty good. I like the pairing of 30A: Inter (ENTOMB) and 33A: Inter ____. I don't know that I agree with the joke in 60A: Double doubles? (HOMERS). I suppose it's true, but not exactly right somehow. Finally, I did enjoy 64A: One working for Kansas or Alabama (ROADIE). That's nice cluing right there.

No major downers, so I'm giving it a hearty thumbs up.