On this, the one hundred and fifty-first year (hint: not a major anniversary) since the founding of the REDCROSS, we find an odd Wednesday puzzle devoted to examples of red things crossing each other in the grid. Generally speaking, I think I've liked Mr. Steinberg's efforts in the past, but this one left me a bit cold. I'm going to note a couple of quibbles with the theme first.

Are we talking about things that are always red, or typically red? Not every BRICK is red. NAILPOLISH is very often not red. A ROSE may be red, white, yellow, or other outlandish colors. Then, on the contrary, we'd all agree that MARS is "The red planet." A MERLOT is a red wine. A RADISH is a reddish veggie.

But CHILI? Yes, a chili can be red or green. But the dish as referenced in the clue is really sorta brownish, IMO. And then, we get REDCROSS, with the word red in the answer. I understand why, but maybe it shouldn't be in a cross. 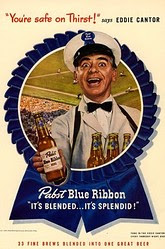 Meh. I'm sounding like Rex. I think I started off on the wrong foot with 1A: WOMANISH. Nobody says this. Womanly, yes. Womanish? Not at all. And then you have the annoying OPALOCKA below it, which I required every cross to get. All this contributes a highly uninspiring NW, including ICEAX and SKAT.

Elsewhere, the fill is much better. PABST is a nice entry, as is PROSPERO. There's a little sense of colloquialism with ITSALIE, BUTWHY, and OOLALA (although I wanted an H at the end of OO). Some good clues include 17A: Something that's just not done at the dinner table? and 30D: One who's beyond belief? (ATHEIST). Well, that's me, and I'm out.