I found this puzzle to be remarkably easy for a Friday, with the exception of the NW corner, which was a real bear. It didn't help that I guessed 2D: Ninth-century invaders of East Anglia as "Picts", or that I managed to convince myself that Germans spoke French ("eST"?). Even so, 1D: ____-Abyssinian War (ITALO), is more usually referred to as the Italo-Ethiopian wars (there were two of them). And who outside of France knows that Oceanopolis is in BREST? And that doesn't even get at the issue of TARBOOSH. Here is a tarboosh: 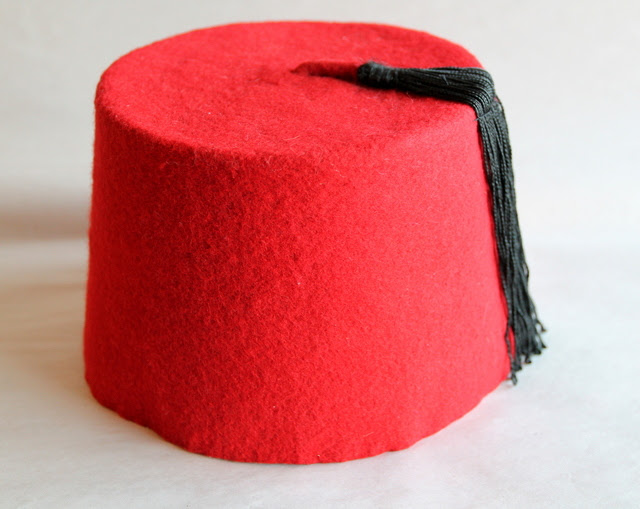 Fortunately I got out of the NW with ESTADO, although I put an A at then end, continuing my miserable language run. In fact, I got no traction until the SW, where DEEDEE essentially opened everything up. I gritted my teeth at YLEM (47A: Matter in the Big Bang theory), a word I'd never heard of. I had TORnUP for a while, leaving me with RnARAREA - I tried to convince myself for a brief moment that 57A: Room in back, say was referring to some kind of space for registered nurses, but that was clearly wrong. I don't much like REARAREA any more. I don't think that's a real phrase.

Okay, I think I've gotten the not so great stuff out of the way. 27A: Unexpectedly (OUTOFTHEBLUE) was a good long phrase. Other fun entries included ANECDOTE, DARKAGES, SPECKLES, and LOOSELIPS. There was a nice sense of relaxed colloquialisms with SPILLIT, HASASHOT, and INASENSE.

Some good cluing was to be found as well. 24A: Hill people, for short (REPS) was unexpected. 54A: A little off? (TRIM) was not too difficult to figure out. 8D: Star role in many old films? (SHERIFF) was clever. But my favorite was 30D: One cast in a Harry Potter film (SPELL). That's great.

A mixed bag, given the NW corner, but I liked it fine overall.