That's what I get for trying to beat 4 minutes on a Tuesday. I would have come very close, except for entering BETtY for Ms. BETSY Ross, mistyping EDSELS with a T on the end, and the not-so-excusable RIBhUT (thinking ShAM for "Flimflam" instead of SCAM). No real defense except for the typo. 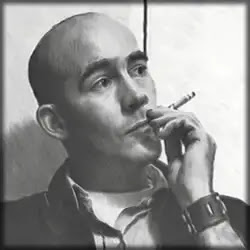 Anyhoo, it's my birthday today, and I get the redoubtable HUNTERSTHOMPSON as a theme. In fact, off of _ONZ____ I got the entire theme in seconds, which is why I was moving so fast through the puzzle. It's actually a reasonable theme, overall. Three 15s, although the third is a partial of the whole book/film title (FEARANDLOATHING/ INLASVEGAS). Still, how exciting it must have been for Mr. House to recognize that the second partial matched JOHNNYDEPP in number of letters. In fact, I only heard of Mr. Thompson later in life, well after meeting his caricature Duke in Doonesbury. I don't think I've ever read anything by him.

For the rest of the puzzle, there are some nice bits, such as the GENTRY/NOBLE pairing, CUDDLEUP, and Big Papi ORTIZ. Speaking of which, the Sox opened spring training today. Hope this year's better than last year. I also like KOALA bears, as well as the clue for ONRED ("How some right turns are made").

Not at all a fan of ACER, LUXE, HESHE, or RIBCUT (?). NAV seems like a highly questionable abbreviation to me.

One thing I will say, though: I'm not planning on sniggling anytime soon.