Man, this took me forever for a Tuesday. Lots of stuff that I just was not expecting. And the trouble began right at 1A: Complain loudly (YAWP). It's not a word I think of very often. And it didn't help that YOGA (1D: Exercise discipline) took almost just as long. JOSE (27A: Tenor Carreras) was an unknown (I actually considered "Josh" at one point), and ZONKS (40A: Crashes, with "out") was not on the tip of my tongue.

Lots of tough names today, too. I've heard of JAYZ (27D: Rapper born Shawn Corey Carter), of course, but I didn't know his given name, nor had I ever heard the name ADELEASTAIRE (48A: *Half of a brother/sister dance duo). SEALE (13D: Bobby who co-founded the Black Panther Party) is not entirely unfamiliar, but I needed every cross to be sure of it. Two eponyms in the grid, with WANG (3D: First computer company to run an ad during the Super Bowl) (fascinating!), and APGAR (20A: Kind of test for newborns). That second one is rather interesting, because it is associated with not one, but TWO "backonyms," both centered around that test: "Appearance, Pulse, Grimace, Activity, Respiration" and "American Pediatric Gross Assessment Record." Another mnemonic for the test is "How Ready Is This Child?" (Heart rate, Respiratory effort, Irritability, Tone, Color." You'd think with all that work making sure people remembered it, that it would have been easier for me to get! Well, hopefully with all this writing about it, it will be easier for me the next time I see it. Which, if the recent past is any indicator, will be tomorrow. Heh. Add to all of that four characters from fiction, two I knew and two I didn't, and a "49D: Miami golf resort" (DORAL), and you've got the makings of a pretty tough Tuesday. 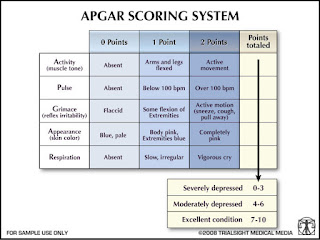 I didn't mind the challenge, though, and I enjoyed, as I often do, the long downs. SKILLSET (38D: Everything one can do) (nicely clued!) and SUGARPEA (10D: Legume with an edible pod). PAT (44A: Word that, spelled backward, can be a clue for itself) was cutely clued.

My error was at CTA (Inits. for Windy City commuters) and PACMAN (46D: Game with a "perfect score" of 3,333,360) (who knew?). I recognized my error when I saw PArMAN, but I guessed at the Windy City transport initials. I've spent not a little time in Chicago. It was many years ago, though, and all that stuck from the subway was "el," I guess.

I guess I'll say I liked it. The theme answers were not perfect, but I appreciate the early-week challenge of the overall.