Just when I thought things were starting to slow down a bit for me, now I'm going to have to brush up on my Torah readings AND my Spanish. :( I thought RANCHeS was fine - I could see them being described as southwestern spreads - but I guess ADeNAI isn't a thing.

But enough about me, how about this puzzle theme? I think it's the most theme material I've ever seen in a crossword puzzle. I solved it on the app and the grid lit up like a Christmas tree when I tapped on 29D. ("Move on!" ... or how to decipher the 16 starred clues). I didn't actually figure the trick out on my own. Horace shouted it out in a 'eureka' moment when we were sitting at the bar having a pre-dinner cocktail. On the other hand, I had dropped in COPACABANA because it was one of the theme clues and it fit, which I thought unlikely to be a chance occurrence. The best theme clue/answer might be 41D. "Suite for use?" (ANAGRAM). Sweet. Although, on a second pass through the puzzle just now, I am reminded of 34D. *Bar order requiring celerity. Ha! 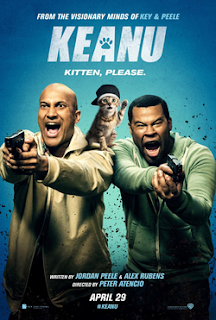 I thought 9D. Make a father of was cleverly clued. I entered something else entirely there at first, which, if I see you in person I will tell you and we'll laugh about.

I'm guessing our esteemed reader Huygens enjoyed both the clue and answer for 33A. Service jobs (LUBES).

It was a nice touch to have Word of logic and Words of logic (ERGO and ORS) cross, and also kind of fun to have ARGOS and ARGOTS in the same puzzle. I enjoyed both SINECURE and PALIMONY in their parallel locations. Two others I enjoyed were 18A. Places for naps? (RUGS) and 43D. The French? (LES).

I'd never heard of LINACS. I'm not a puzzle constructor myself, but LINACS seems to me like the kind of entry you might end up with when you've made a really terrific puzzle and it all fits together beautifully except in one spot where you've got what looks like a random collection of letters, which you then Google desperately until you find some meaning for it. But, maybe that never happens.

I'm not quite sure how to grade 1A. *Pitiers (DOCKS). I should maybe give it an A because it made me and Horace LOL. After I dropped "it" from Pitiers, I sounded out the result and came out with something like Pie ers. No good.

Bonus trivia question: what is the connection between yesterday's puzzle illustration and today's?