Twelve minutes+ on a Monday is nothing to write home about, but ending up with a 12:12 on the 12th is kinda cool. Maybe I can keep the dodecal theme alive and come up with a dozen things to say about the puzzle.

1. I thought the theme, BOYMEETSGIRL, was cute (BILLYCRYSTAL, RAULJULIA, JOHNCANDY). I wonder if there are any Girl Meets Boy equivalents. If it weren't so hot out right now, I might be able to come up with some. [Some minutes later] I did think of one: Meg Ryan. Oh, and how about Sandy Duncan? Remember her?

3. I liked DAUB and SUDS in the middle north. 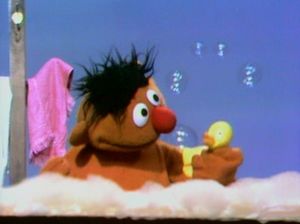 5. I liked the RIFT/RIFFS cross in the deep south east, although I would have liked a RIFT / RIFFed pairing even better.

6. How about the all-but-one-letter double double in the mid west with JAMJAR and OLEOLE? It crossed my mind that another possibility there could have been JArJAR and OLEOLE except that nobody likes to be reminded of that foolish Gungan from Naboo.

7. Oh yes, the reason I took so long to finish the puzzle was because of the cross at 22D/24A where my thinking was not too sharp and my early ideas fell flat. If I had come up with AMAJ (22D. Key of Beethoven's Symphony No. 7: Abbr.) sooner, I coda been a contender. I've never heard of AMATOL (24A. Powerful explosive).

8. There were a number of three-letter answers in the north east and south west, but not much poo in the bin, so to speak. NEO CON is probably the worst, but mainly because we see it so often.