First of all, congratulations again to young Mr. Agard on winning the American Crossword Puzzle Tournament this year! He finished the final puzzle - what many consider to be one of the hardest puzzles published all year - about 30 seconds faster than I finished his Monday offering today. Ah-mazing. And he finished with no errors, which is more than I can say for myself here. Sheesh! I entered SMS at "35A: Gchat exchange, for short," (IMS) and I didn't notice OHsOAN running down (24D: From Columbus or Cleveland). I think I was so relieved to have finally figured out 40A: Here's the kicker! (FOOT), that I forgot to check anything else. Not a great way to start the week, but hopefully I will have more ACCURACY in the future. 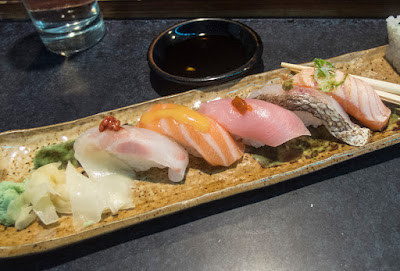 A clever theme today, with film actors whose initials are the same as the chemical symbol for silver. And there's some bonus film-industry-related fill in TAKEACUT (17A: Get 10%-15%, say) (We've been watching "Call My Agent" on Netflix recently, which is titled "Dix pour cent" (10%) in French, and it's all about talent agents. Not bad, really, and a fun way to practice your French.), AGES (36A: All ____ (what a G rating means), ADAPTS (27D: Turns from a book into a movie, say), and maybe even PIX (41A: Photos, informally).

There was some fill I thought was a little obscure for a Monday: ULTA (1D: Big name in beauty supplies) (Never heard of it), and SWAGSURF (39D: Rhythmic group dance of the 2010s) (OK, I'm old. Don't rub it in.), in particular, and I didn't love NOI (especially with the strange I duplication at SILENTI), RECS, or THX. But we're big fans of REUSABLE items, and the six-stacks in the NE and SW were nice. And really, with a constructor who's so good at solving, it might be hard for him to realize what the LIL people know and don't know, so I guess we'll cut the crossword EXPERT a little slack.