Well, the math just didn't add up for this solver. I couldn't figure out the rebus. A big problem for me was that there weren't many of the theme answers that I was sure enough of to force the issue. And, I had errors like DEmI instead of DECI (Prefix with liter) that compounded the problem by obscuring the ones I might have known (L[AND]OCALRISSIAN, for example). For all I knew, oCAL____ was some obscure "Heroic figure in "Star Wars" films that I was unaware of. The final contributing factor is that I ran out of time. We had an early lunch with the family today, and then saw a production of "Yeomen of the Guard" which took up most of the day. And, as I have to hand off to esteemed co-reviewer Colum Amory today, I thought I'd better get a move on, so I got Horace to tell me the trick.

And, it's a nice trick. I wish I had gotten it. Each rebus square has five letters, all of which figure in the across answer and the two of which, the first and last, figure in the down answers. So 23A is KIDINAC[AND]YSTORE and 7D, which crosses at the [AND], is MAC[AND]YS.  Sweet. :) 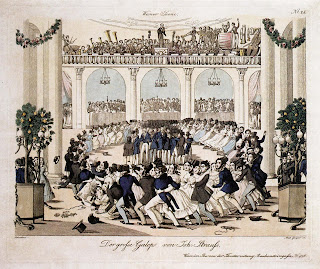 After looking at, and failing to come up with anything for 20A. 2018 N.C.A.A. football champs (ALABAMA), I now realize my goal of memorizing all sports teams, mascots, and stadia isn't going ambitious enough. It looks like I am going to need to memorize all sports results, too. It's lucky I'm turning this over to Mr. Amory today. I've got a lot of work to do.

I figured this one out at the crossing of PA[PA]CY and [P[AND]A]EXPRESS. I knew I wanted the first one down, but couldn't figure out what "Pa Express" might be. It's the clever addition of the "+" sign to mean "and" that fills in the remainder.

I had a very gloomy period of time staring at the NW, where I had confidently put deKES in; my confidence was falsely upheld by those correct last three letters. Worse yet, I tried irAN for OMAN. Thus, 1A was the most excellent dARFRiM for a while. Not to mention that football powerhouse eLABArA.

Anyway, I love 40A: One doing the lord's work (SERF) - note the lower case "lord". And I'll accept EREADER because of the excellent clue: 119A: Device many use in bed.

I know I've got huge shoes to fill this week. BRAVA, Frannie!