I don’t know about your lot, but Frannie and me, we’re out most Mondays. We usually stick with something basic, though, like bourbon or beer. These here fancy drinks are for later on in the week.
The SIDECAR, famously (in my circle anyway) mentioned in the movie Auntie Mame (“… bring me a very light breakfast: black coffee and a sidecar.”), and the more standard breakfast cocktail, the MIMOSA, followed by two classic gin concoctions, the GIMLET and the MARTINI (Mmmmm…. ) All four drinks are given a non-alcoholic clue, and all are positioned over the letters “ME,” making true the revealer, THEDRINKSAREONME. Not a bad way to start the week. 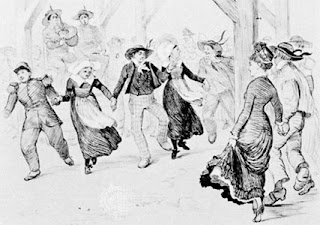 In the non-thematic answers, I enjoyed TIDEOVER (3D: Sustain temporarily), OUTSET (11D: Beginning), and WREAKS (12D: Unleases, as havoc) (“as havoc…” is anything else ever “wreaked?”). I also love SALMON, smoked or otherwise, and it’s too bad that SILL wasn’t clued as pickled herring, then we could have had a real Nordic thing going on. Mmmmm… SILL…
Additionally, we have the almost contradictory LOOKALIVE and EPITAPH. Mr. Cee is surely no AMATEUR.
Yesterday I “learned” two words, today there’s another one I’m not familiar with – FLACKS (41A: Press agents, informally). Who knew? Aside from the fine folks at UPI, that is… which is where I had my error today. I guess I confused my news giants and thought of AP, even though I’ve never heard of a mud and thatch HaT. Sigh.
Overall, a fine puzzle to have at the OUTSET of the week.