Untimed, due to a multi-device solve (see below)

Sorry so late with the review today. Horace and I had to attend the farewell party for the outgoing president of Harvard University tonight and we are just back home. I started the puzzle this morning, but didn't finish it right away and couldn't get back to it during the day. Horace brought his phone to tonight's event so I was able to work on the puzzle while we waited for the show to start.

And what a show it was. John Lithgow emceed, Lawrence O'Donnell announced President Faust's popularity ratings - the highest since Charles William Eliot back in aught nine, Conan O'Brien and Martin Sheen sent video messages of congratulations, and Wynton Marsalis blew the lid off the joint to top things off. The programme was followed by an all-out reception with free flowing libations, a swinging dance floor, and a take-home souvenir glass with the #28 on it. You've got some big shoes to fill #29.

Anyhoo, it's the puzzle that should TAKEC[ENTER]STAGE, not my personal TAUs and FROS. I thought today's theme was both clever and well executed. One has to input [ENTER] between other letters to complete the theme answers, at which point, the rest of the answer drops to the next line, as if the ENTER key had been pressed. My favorite was, of course, 32A: In sci-fi, it had the registry number NCC-1701 (USS[ENTER]PRISE). CHICK[ENTER]IYAKI added the bonus feature of splitting ENTER across two words.

The grid contained a lot of other ATTRACTANT fill including CEASE, FREESPIRITS, SITSPAT, SERAPE, TYPHOON, THANES, and SCYTHE, clued amusingly with "Wheat whacker." Ha! "Shortening in the kitchen?" (TSP) was clever, and I thought the clue "Bread common to many countries" (EURO) ERAT de bon TON aussi. Too much? 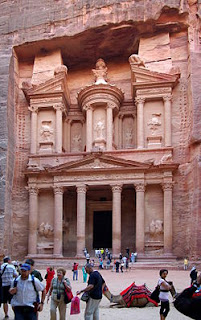 There were a DUSTERS in the grid like ETYM, CSIS, CPA, STR, and CEES, but otherwise, nothing to really RUE.