Today we have four entries clued by way of decorations within the puzzle itself. I will try to get myself a version of the actual paper so I can see how this looked in print, but on the web, it looked like this: 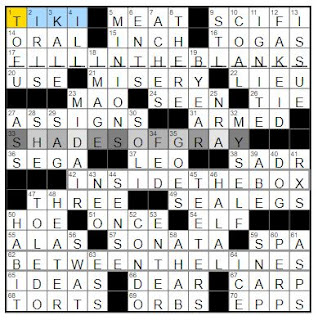 Not terribly scintillating as a theme, I don't think, but I guess they've got to keep trying new things.

Not much long material in the fill, but I liked SEALEGS (49A: Good standing in the Navy?), and referencing Whitman ("Song of MYSELF") is ok with me. I briefly had "cspan" instead of TOGAS for "16A: Coverage of the Senate?," and "9A: Zombie's domain" (SCIFI) also took me a while. Nice work on those clues. MISERY, too, got quite a clue - "Word that sounds like a state when accented on the second syllable rather than the first." Hah!

Interesting trivia on SEGA (36A: Brand name derived from the phrase "Service Games"), and 65A: Bean sprouts? (IDEAS) was cute. 9D: Card letters (STL) was tricky - that's the St. Louis Cardinals they're talking about - and 50D: Something you might kick after you pick it up (HABIT) was fun.

So I guess what I'm saying is that I liked bits of the fill better than I liked the theme itself. Sometimes that happens, and that's ok.