A fun theme today of doubling up the first initial of many famous things with an initial initial, and then cluing to make the doulbling make sense. Clear enough. We start with XXFACTOR (17A: Part played by women and girls?) which makes sense, I guess, because this puzzle is co-authored by Melinda Gates, the famous XX to Bill's XY. And, not coincidentally, it's a real thing started to help improve the lives of women and girls. The XX Factor.

Not being one who takes a lot of pills, I was only marginally aware of the B-Complex vitamins, so BBCOMPLEX (46A: Group of buildings housing a King?) did not come quickly. They're referencing the late blues guitarist B.B. King there, by the way. 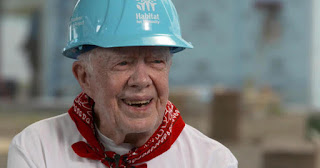 So the theme is fun, but the fill lacked any real zingers. I liked BOXCAR (1D: Freight train part), because I just like thinking about boxcars, and the CYCLADES (39D: Island group in the Aegean Sea) are certainly evocative, but having the double-initial-initialled JMBARRIE as an answer seems to dilute the theme a bit. I guess OKFINE doesn't start with two initials, though, since the Scrabble dictionary just added it as an acceptable word. Is it just me, or has the two-word and Q-word-with-no-U mania kind of taken the fun out of what was once a great game?

Nobody likes a RADARGUN (67A: Speedster's undoing), and nobody who doesn't live in Kentucky knows for sure what a BLUEROAN is, but the clue for FERRIC (7D: Irony?) was hilarious, and I liked the French answers OUTRE (5D: Eccentric), EAU, and FESSES. What's that? You say FESSES wasn't clued as French? Bummer.