I suppose it reveals a little about me to say that the one name I was familiar with in today's byline was Deb Amlen. And it might reveal even more about me to say that that name alone generated more-than-usual interest in the puzzle. If you don't know, she's another NYTX blogger. And not just any NYTX blogger, but the "official" one who blogs about the crossword for the New York Times itself! (See: "Wordplay" in the links below right.) So clearly, she would not want to put her name on a crossword unless she was pretty proud of it. The other name, as it turns out, is on a TV show called Orange is the New Black. 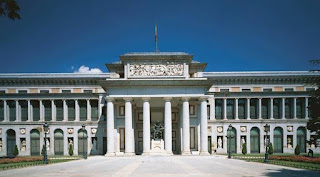 So how was it? Well... it starts out with the rather difficult - "1A: Who says 'Speak, hands, for me!' in 'Julius Caesar'" (CASCA). It seems hard for a Tuesday, but you can't really argue with any clue concerning the Bard or the man who was murdered on the IDES (nice tie-in). Nice to see AMY right there at the top of the puzzle, and then we come to BLIP (9A: It might be on one's radar), which I thought was well-clued. Other clues I enjoyed were "5D: Cost of withdrawing, say" (ATMFEE), "35A: Howe he could invent!" (ELIAS) (guffaw), and "33A: It might have golden locks" (DOOR) (funny, but really? Even at Versailles I doubt the doors have golden locks, but I suppose anything is possible). And for the "amusing initial ideas" category today I PROFFER my first thought - "tiger" for "63A: Animal to get down from." (EIDER). Heh. Why would you ever be on a tiger? I don't know, but I would still advise that if you ever do find yourself on one, you get down immediately and move away as quickly as possible. Have you watched "Planet Earth II" yet on Netflix? If so, you will maybe have seen the video of a jaguar catching, and then matter-of-factly killing, a caiman alligator. You do not want to irritate a big cat.

The long Across answers are all quite good, my favorite was ALLFLASHNOCASH (19A: Dressed like "a hundred-dollar millionaire"). I had never heard the clue or the answer before. Hah! And if you take the first word of each long Across answer, they spell out the name "All That Jazz," a movie about BOB FOSSE. I saw that movie many, many years ago, but the only part of it that I really remember is the operation scene, where I'm pretty sure they show his ribs being spread apart to allow access below. Cool. ish. But gross. NOTFORME.

Overall, I liked it fine. The theme answers were lively, and the theme itself was solid.