Today I figured out the theme today at the first opportunity ("Scarcity" (EARTHDAY)) (dearth), but it didn't help me much, except for a couple times where I entered a Y at the end of a theme answer before I figured out the rest. Luckily, I didn't try that with 23A: *Futuristic film of 1982 (ENTREE) (Tron) (Hmmm...). The Y thing did help with YKNOW ("See what I'm talkin' 'bout?"), though, and I did fill in PIGLATIN without even really fully reading the clue, but overall it played a little tough for me, and finding my error (AaH instead of AHH) took me over a minute. I should probably just leave those "contented exclamation" clues empty in the middle from now on. 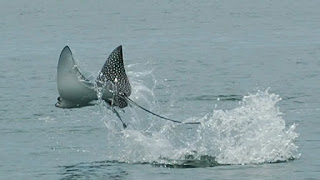 I guess the ENTREE answer makes it so that the "ay" ending isn't necessary to the theme, but those other Ys at the ends of words (especially SLEEPY, being almost "in position" for a theme answer as it is) dilute the overall effect a bit for me. Plus, I guess I'm kind of over PIGLATIN. It's interesting that Mr. Chen found some common (and one uncommon) words that could be interpreted as PIGLATIN, but, well, I guess I'm just not in a very good mood today. Sometimes you'll have that.

Other things that rubbed me the wrong way: Two networks (NBC & CBS); the ASHTRAY smack dab in the middle; ODON, TORIC, OTS, DAS, YAPAT, CHITIN... and the inconsistency of having both IHEARYA and YKNOW in the same grid. And it also kind of annoys me that ANNAL is perfectly acceptable in a crossword, but not accepted as a valid word in another game on the same site "Spelling Bee." Who's with me here?

I'm sorry to be so negative, but I didn't love this one. Again, it could just be my mood. Hope you enjoyed it more.