My time is nothing to CROW about, but at least I completed the JOB today, which cheered me up after yesterday's DNF fiasco. For me, the solve alternated between AHH (That's the spot) and WIDE (Hard to get around, say). MIDMARCH, MARIECURIE, and MOZART made the north west go like a hot knife through butter, while JANEANE and ERRATAPAGE quickly broke open the south east for me. But it was LATE before I could populate the diagonal swathe running from the bottom left to the top right. Problem areas for me included HEME (Deep red pigment), TRASHMOUTH (One spewing obscenities), and CLAMJUICE (Ingredient in a Caesar cocktail - I was sorry to learn about that. Ignorance was bliss!) I also had way too much trouble with "Word with mother or sharp" (TONGUE). That one took me forever, but it shouldn't have. I felt like  a real POMACE when I finally figured it out.

In the south west, I got nowhere fast thanks to Native of Thimphu (BHUTANI). "Tied up, in the operating room' (LIGATED) was another no know for me. And, also, ick. 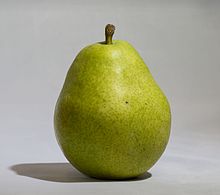 I enjoyed Space race? (ALIENS) and its companion EARTHLINGS. I thought Side with? was a great clue for ABUT, even though it gave me a lot of trouble. "Hellenic character" was a nice clue, especially as there are six possible Greek letters that fit. I enjoyed BEERGUT and UMLAUTS (the rock variety in this case), and TEMPEH, although I prefer its relative, Tofu). I was surprised by the clue, "Coconuts, to a maroon on an island, maybe" (STEADYDIET). I didn't think anyone but Bugs Bunny could use maroon as a noun.

DINGER reminds me of the excellent Simpsons episode where Bart discovers that Major League Baseball is spying on everyone. When Bart asks Mark McGwire why, he replies, "do you want to know the terrifying truth, or do you want to see me sock a few dingers?"

The puzzle contained a number of words I've never encountered before including HEME, POMACE, and PAWL, while at the same time duplicating an entry from Thursday's puzzle, causing me to wonder, is SITBY the new eel?

I thought D.C body (CONG) was weak, and  I wasn't  less keen on THINKYOUNG as the answer to "Be open-minded, maybe." I am going to respectfully disagree with Mr. Diehl on this one. In my experience, open mindedness isn't  a function of age. There, I said it.